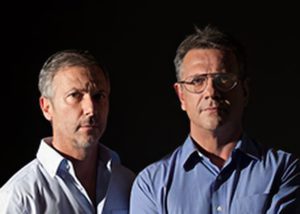 Over the past 25 years, Fernando and Humberto Campana have rooted their work in the research for an unconventional use of materials providing second-generation objects with aesthetical dignity. During this lecture, the Campana brothers start exploring the history of Brazilian architecture and design culture from the indio craftmanship up to the prominent figures of the modern era: Neimayer, Lucio Costa, Lina Bo Bardi, Sergio Rodrigues just to name a few.

In this perspective their work is well rooted in the Brazilian tradition as they point out recalling the origins of their most successful projects. Dating back to 1993, the Vermelha chair was born from a tangle of cords the Campanas bought on a street market in Sao Paulo. Years later, one of their original prototypes was videotaped and sent to Massimo Morozzi, designer and art director of Edra.

Since then Morozzi played in important role in projecting the brothers’ work on to the international stage with celebrated designs such as the Boa sofa – over 90 meters of velvet tube with padding in polyurethane foam – or the Favela armchair with its highly intricated design, inspired by the favelas constructions and actually made using craps of wood they found on the streets.

An approach the Campanas pursue also in their more industrialized pieces such as the ones produced by Alessi which ironically are also among the more manual ones in the extensive catalogue of the Italian company.