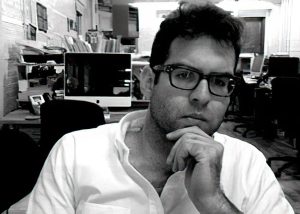 Rob Giampietro is a designer and writer. Recent work has touched on a range of topics, including the relationship of movement and interaction, the history of visual identity and branding in the arts, and the future of the museum in the digital age. His essay on the rise of graphic design MFA programs, School Days, was published in the Walker Art Center’s Graphic Design. Rob was a 2013 MacDowell Colony Fellow and the 2014–15 Katherine Edwards Gordon Rome Prize Fellow at the American Academy in Rome.

From 2010–15 he was also Principal at Project Projects, where he led interactive and identity projects for clients in art, architecture, and the cultural sector. The studio was a finalist for a National Design Award in Communication Design in 2011. From 2003–8 he was Founding Principal at Giampietro+Smith.

As executive board member and vice president of AIGA/NY from 2007–9, Rob organized programming that included a historic conversation between Wim Crouwel and Massimo Vignelli and a free series of talks by emerging designers at the Soho Apple Store.