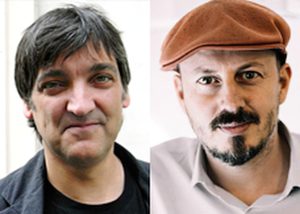 Martí Guixé graduated in interior design and then studied industrial design at SPD in 1986. After a job as design consultant and two years in Seoul, he opened his own independent studio. He lives between Barcelona and Berlin. Guixé’s work ranges over products and interiors, installations, graphics and food design. At the turn of the last century, he has formulated a new way to understand the culture of products by calling himself an ex-designer, as a statement against the limitations of the traditional approach to design.

He’s also known as the pioneer of food design: since 1997 he has started his research around food typologies and forms by building edible products that are ergonomic, functional, communicative and highly interactive. His projects and installations have been exhibited in important museums all over the world including the MoMa in New York, the MACBA and the Museu del Disseny in Barcellona, the Triennale di Milano, the MART in Rovereto, the Centre Georges Pompidou in Paris. Among his clients: Alessi, Authentics, B-sign, Camper, Cha-cha, Chupa Chups, Danese, Droog, Magis, Nanimarquina, Saporiti, the Galleria Nazionale d’Arte Moderna e Contemporanea in Rome.

Born from a family with a passion for genuine ingredients – his father was a butcher and his grandfather a fisherman – Javier Bonet begun his professional journey at the age of 17, working as a waiter in a small family bar in Mallorca. Thanks to an unexpected encounter, he started an international career that led him to spend almost fifteen years in Michelin-starred restaurants in Germany, UK, Italy and Japan, climbing up the ladder from waiter to director and then consultant for special projects.

Back home, he has been the gastronomic director of all the food and hospitality initiatives by Camper. Since 2006, Javier has developed into a brilliant enterpreneur, creating restaurants and bars that allow the clients to interact with food and turned a little street in Madrid, calle Ponzano, into a food destination. His company, Sr. Bonet, has opened Sala de despiece, Patrón Lunares, Muta, Muta Norte, Muta Equilibrio, Muta Brasil, Muta Balear y Smoking Club between Madrid and Mallorca.