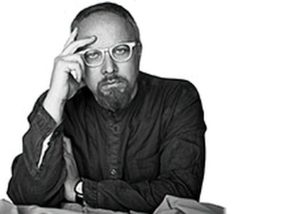 Giulio Iacchetti, born in 1966, works in the field of industrial design since 1992. The distinctive characteristics of his work are the research and the definition of new typologies of objects as the Moscardino, a multiuse biodegradable utensil for which, in 2001,  he won the Compasso  d’Oro together with Matteo Ragni. After the Moscardino – that is now part of the permanent design collection of MoMA, New York – many successful projects followed with collaboration with important companies such as Abet, Alessi, Elica, Foscarini, Magis and many more.

Iacchetti alternates this activity with curiatorial projects: in 2009 he was awarded the prize for innovation – Premio dei Premi – by the President of the Italian Republic for the Coop Eureka project, which brought the design in the large-scale retail trade.

In 2012 Iacchetti launched Internoitaliano, a new system for the production of designer furnishings inspired by the italian way of living. At the heart of Internoitaliano is a production system constituted by a network of workshops and manufacturing companies that embody the excellence in the Italian ability to create top-quality products. Internoitaliano, therefore, is truly a fabbrica diffusa, a factory network.

In May 2009 the Triennale di Milano held a solo exhibition entitled Giulio Iacchetti. Disobedient object. In 2014, he won his second Compasso d’Oro for the design of the manhole covers Sfera, with Matteo Ragni.