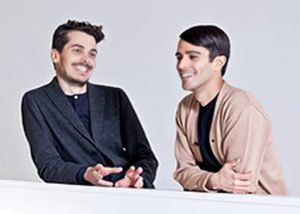 Andrea Trimarchi (1983) and Simone Farresin (1980) are Studio Formafantasma – a duo of Italian designers based in Amsterdam, The Netherlands. They attended the Master’s course at the Design Academy Eindhoven, where they graduated in July 2009. Their designs have been presented and published internationally; prestigious institutions such as the MoMA and the Metropolitan Museum in New York, the Victoria and Albert Museum in London, among others, have acquired Formafantasma’s designs for their permanent collections.

The work of Studio Formafantasma touches relevant issues such as the role of design in folk craft, the relationship between tradition and local culture, a critical approach to sustainability, and the significance of objects as cultural vectors. The studio is interested in creating a design practice that merges the Italian and the Dutch design identities, craft and industry, local necessity within the global context. On a conceptual level, their works seeks to stimulate a more critical and conscious relationship of the user with the objects.