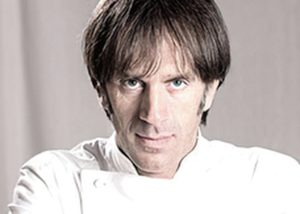 After previous working experience with Gualtiero Marchesi, Albert Roux, Alain Ducasse and Pierre Hermé, Oldani opened his own restaurant in his hometown nearby Milan in 2003. One year after opening, the world’s most authoritative food guides counted his restaurant amongst the best italian restaurant and he was mentioned amongst the greatest chefs of contemporary Italian cuisine.

He was designated with many awards through the years: starting with the Ambrogino d’Oro by the City of Milan, in 2008, until the nomination of Ambassador Expo 2015; not mentioning lectures at Harvard Business Shool to share his business experience, whose approach and organization were applied to many different sectors, not only to restaurants.

Recent activities saw Oldani opening Davide Oldani Cafè – in the new luxury Piazza at Malpensa Airport, Milan, in 2014; signing the dish symbol of EXPO in Milan and launcing a new table collection in collaboration with Kartell.